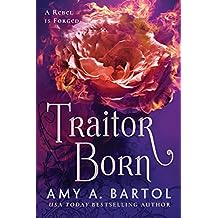 For all you Amy Bartol Fans out there Traitor Born, the second installment in the Secondborn Series is set to release April 17th, 2018. Here’s what I thought:

Amy Bartol presents yet another thrilling tale in the second book of the Secondborn Series. Traitor Born delivers a powerful punch as Roselle’s story picks up where it left off in this Sci-Fi dystopian fantasy. As per usual, Amy has a way of pulling the reader into a strange new world, her imagery through her words delivers a story that runs like a movie reel within your mind. Roselle finds herself caught between extremes, either everyone wants her or rather wants to control her, or her mother and others would like to see her dead. Traitor Born is full of secrets that come to light, conspiracies against the Fates, as well as heartache and heartbreak. All the while Roselle struggles to retain her identity in the face of what she now knows she must do to make changes for all the Fates. Some of her biggest fears are brought to light as she begins to embrace the path that she has chosen. There were sections of the book that was reminiscent of other stories that I have read, and some situations seemed very familiar yet different but overall I thoroughly enjoyed reading Traitor Born, and because of that I was able to overlook some of these sections when they quickly gave way to an action-packed story. In Secondborn, I was sure that I was pulling for Hawthorne and Roselle to pick up the remains of their tattered relationship, but I now find that I’m torn in the face of all that happens in Traitor Born. I’ll leave that for you the reader to figure out where your thoughts are on the two because let’s face it if you have read Secondborn you are definitely looking forward to the second installment of this series. For those of you that don’t care for cliffhangers, beware, this book ends on a serious cliffhanger. I was left feeling somewhat bereft at the turn of events. All I have to say is watch out for the Zeroes!

Last but not least, I received an ARC of Traitor Born via Netgalley which in no way affected my review. Thank you, Amy Bartol and 47 North Publishing for the opportunity to read and review yet another brilliant book in the Secondborn Series. Happy reading everyone!

This is a text widget, which allows you to add text or HTML to your sidebar. You can use them to display text, links, images, HTML, or a combination of these. Edit them in the Widget section of the Customizer.
%d bloggers like this: